The Matchmaker mobile app has been fully revamped with a slicker interface and more helpful information. The app now shows the huts, users, game statuses, ranks, and more! 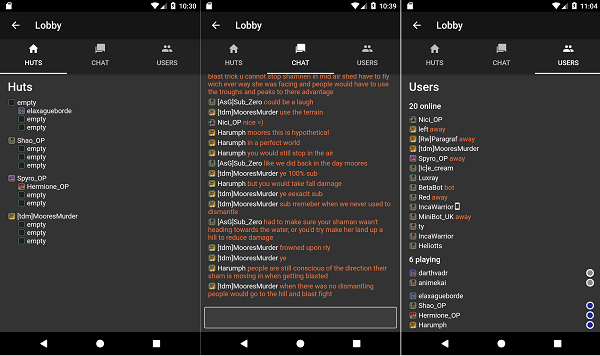 The new Mobile App can be downloaded from the Google Play Store.

For everyone on iPhones, Windows Phone, or just a computer without the matchmaker installed, we’re also hosting a new web interface that looks just the same available at mm.popre.net

A few changes to the leagues for Season 2. The distribution of ranks will be weighted more towards the lower ranks and Shaman rank will be limited to 10 players.

There is also a new incentive to play for FireWarrior and Shaman level players - every day without a game played results in a loss of 2 points.

Congratulations to Nici, Skylo, and Spinnifix for coming in at the top of the season 1 league. The full final results can be viewed on the Season 1 League Page.

We’re introducing seasons into the Populous league along side the standard long running league table. Season 1 will begin on July 1st and continue 3 months. Every quarter the new season will start.

In the new season, everyone will be reset to wildman, BUT you will get some credit for your standing in the previous season. It will be as follows:

Other ranks will be 20% of the non-shaman players each split equally into 3 for Grade+, Grade, and Grade-

Grades are calculated when you finish a game as expected and are re-calculated at the end of the day for everyone, including those that don’t play

Play 10 Ranked Arena matches (2v2 or 4 players FFA) and your rank will be unlocked for the leagues table.
So get your ally and battle 2 other players and make sure you’re the last shaman standing!